The Florentine Carmel was originated by a group of women (Monna Innocence Bartoli, Lapaccini Lena, Rosa Filippi and Mattea Chillini) who were spiritually linked since 1450 to the Carmine in Florence, and who were pledging to live in the Rule of the Carmel. They followed the footsteps of Jesus and they took the Virgin Mary and the prophet Elijah as models.

The sisters prayed and worked together, and attended the Mass at the near Carmelite friar Church. The latest studies confirm that these sisters were nuns legally bounded by a vote and a papal bull. For the emerging Community's need, Monna Innocence could get to the Carmelite friars for help. She also sold her land at the time of the profession to get some additional autonomy.

Between 1479 and 1482 they were granted the scapular, and then - under the indication of the Carmelite friars of the time, and according with the current custom, they gradually adopted a cloistered lifestyle. In 1521 the sisters took the veil of black nuns.

In 1520, and probably under the influence of Father Giovanni D'Antonio who was still the Governor of the Carmelite Monastery, there was a shift of jurisdiction for the monastery done by Giulio De' Medici head of the Order to the Archbishop.

But the profession of the Rule of the Carmel, and the acceptance of their spirituality had soon gained a solid foundation within the Florentine Church. They gave life to a varied religious humus, that saw the significant presence and acceptance of diocesan and religious, from Dominicans to Franciscans to the "new" Jesuits.

Among other major foundations there is the Carmel of the SS. Incarnation in Rome, which was granted by Pope Urban VIII (Barberini) in 1638. Its founders  were Mother M. Grace Pazzi, granddaughter of the Saint, and the novice Sister Minima Strozzi, who is also Venerable.

Probably in 1560 - thanks to the Carmel's deep friendship with a lay Dominican, Maria Bartolomea Bagnesi (1514-1577), Saint Magdalene was introduced to Savonarola's reformist circles headed by St. Catherine de' Ricci. This was an event that motivated and moved all Carmelites, including Mother Evangelista to a passion for Savonarola's ideas, and pushed them for a reform for the local Church of St. Catherine of Siena.

At her death, her body was buried under the altar, and her books became a pillar for the training of the novice, as his confessor, don Agostino Campi, had already become the governor of the monastery. There were also some contacts with the Ippolito Galantini, a contemporary of S. Magdalene.

In this climate of renewal and enthusiasm, Catherine entered the Pazzi family (1566-1607), in religion Sister Mary Magdalene of the Incarnate Word, the future Saint, which formed on the Word, made the announcement of the Trinity, the heart of her spiritual journey as the possibility of a genuine renewal of the Church the Bride. In this respect, she also dictated several letters addressed to Pope Sixtus V and S. Catherine de' Ricci.

The process for the canonization which started on 22 April 1669, culminated a few years after her death. Her liturgical feast is celebrated on May 25th.

Florentine Carmel guards not only the uncorrupted body of St. Mary Magdalene, but also the saint's commentary on the Scripture, which is full of profound theology. It was recorded by the sisters, under the guidance of Sister Maria Pacifica (del Tovaglia). The sisters who witnessed the saint's obedience to the Spirit are precious as they provide to scholars a unique asset (all the tools) for studying Saint Magdalene's faith and thought.

The monastery of the Church contains some paintingsby Curradi and Sagrestani (XVII-XVIII c.) who interpret the figure of the Saint according to the needs of the time. They give attention to her extraordinary mission of renewing the Church.

There are over seventy sisters who are recognized and considered venerable witnesses.

Particularly during the 1900 there were sisters who distinguished themselves for promoting spiritual formation thanks to the translation and publication of the original works of Sister Gesualda Sardi (+ 1930, the first French translator of the works of St. Therese of Child Jesus and the Bl. Elizabeth Trinity in Italian), defined by Mother Agnes of Lisieux "Teresina in Florence," Sister Teresa of the Child Jesus (Sardi) and Apulian, Sister Minima Monterisi (+1986), for many decades, diligent and archivist.

During the course of centuries, the Carmel of S. Mary Magdalene, moved three times. Firstly, in 1624 when Urban VIII asked the monastery of San Frediano to be moved to Borgo Pinti, as he had his grandchildren in it.

There he went on pilgrimage to S. Therese in 1887.

In 1888, the site was requisitioned and moved by P. Savonarola, so that the nuns had to abandon this site.

But in 1928 after a devastating earthquake, it was necessary to shift the monastery further to the hills of Careggi, where many friends and witnesses, including Giorgio La Pira, Fioretta Mazzei, Don Milani, Don Barsotti and many others, continued to venerate the bodies of St M. Magdalene and the Blessed.

The Sisters continue their fraternal life made of prayer, work, silence, and they are animated by "the anxious desire" of a salvation for every creature, a salvation which was so dear to their Holy Mother, and which was thought for the benefit of the whole Church.

In recent years, in addition to the normal reception of pilgrims coming from various parts of the world to venerate St Mary Magdalene, the Community is getting ready to offer new accommodations and work tools to all scholars interested in a renewed study and understanding of Saint Maria Maddalena's scientific thoughts. 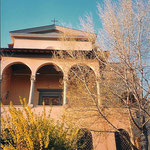 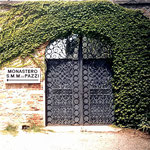 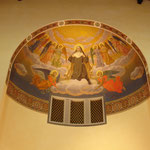 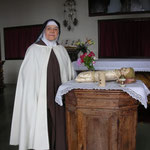 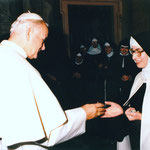 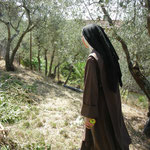